While at the National High School Journalism Convention in St. Louis, I learned so much about broadcast journalism and discovered that I enjoy topics I initially didn’t.

Thursday’s sessions kicked off the convention. I attended a day-long Video Broadcast workshop led by A.J. Chambers, an adviser at Richland Northeast High School. We took notes on the b-roll, shot types, storytelling, and editing during the first half. As we were shown examples of other student’s work, I realized that we had watched some of RNHS’s stories during my junior year in video/broadcast class. This guy was the real deal.

After lunch, we were sent out in groups of three to create a NAT or broadcast package about some aspect of the convention. I worked with the two guys I sat next to, Roby and Robbie. After lots of brainstorming, we decided to produce a story on the college fair. Fully aware that our time was diminishing, I immediately started looking for subjects. Once we had completed the first interview, it became clear that each of us had a different idea about what story would be told. Robbie suggested something very different, and I told them both, “we need one focus. What’s our focus statement?”. We decided on “Colleges and students search for each other.” I think I’m starting to love to focus statements, I thought to myself. This completely new mindset contrasted with my messy “let’s see what happens” attitude of last year’s video endeavors. 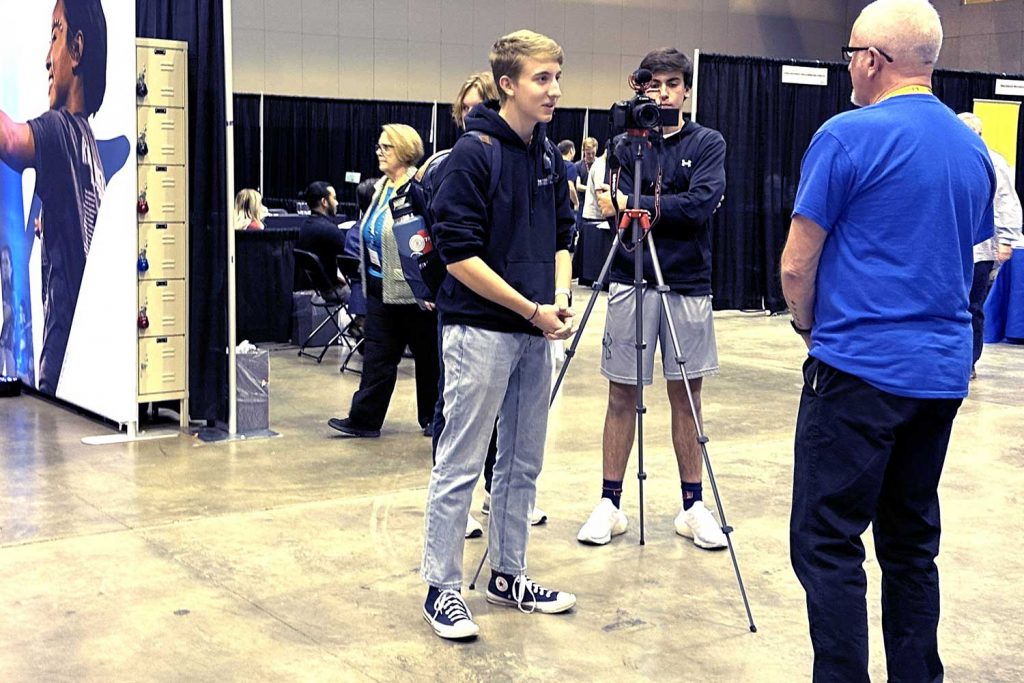 Working on a broadcast package during the Thursday workshop

Thursday night at NHSJC’s opening ceremony, I listened to Pulitzer prize-winning photographers talk about their work and experiences. Though the presentation was long and boring at times, I thought the images shown were beautiful and found the presenters’ stories interesting. I especially liked what Laurie Skrivan said about how spending time around your subjects without the camera helps you gain relationships that will help your story be fuller.

That night, Ms. Plows told me that the editing contest I was enrolled in for Wednesday was scheduled for the early morning and not the afternoon like I thought it was. Waking up at seven in the morning was painful, but I ate breakfast and made my way to the soon-to-be editing bay.

The three hours of editing flew by. At first, I wasn’t very confident, but as I started assembling the clips, the story revealed itself to me (that’s my favorite thing in the whole universe: when you begin to see the story coming together). I color-corrected the dull-colored clips to subconsciously make my video stand out to the judges, exported it in multiple formats so it’d play no matter what, and handed the flash drive to the competition’s moderator.

Over the next two days, I’d attend as many sessions as possible. I intentionally added sessions that covered topics other than just broadcast, such as “Bold Journalism” and one about graphics. Due to all of the notes I was taking and the competition before them, Wednesday was the only day since I bought my MacBook that I thought it might die.

With the new knowledge fresh in my head, at the end of each day, I thought about how to implement more broadcast videos in the Panther Press.

I learned so much from NHSJC and am hungry for more. I can’t wait to get out there and tell stories using what I now know.