Arriving at the airport, I was nervous at first, but it was also really welcoming.  Yearbook is a welcoming community with very nice people, and I was glad that I got the opportunity to go to St. Louis this year. I was nervous about TSA but once I got through it, I realized it was not as difficult as it seemed.  I really loved the plane ride a lot.  It was fun, and I watched Selena’s Astrodome performance there and back and listened to Ana Gabriel. Ms. Plows bought cookies from my cookie business to share with everybody there and it was a pleasure to see everyone enjoy my cookies.

When we got to St. Louis the airport wasn’t what I expected.  When I first stepped off the plane, I got a whiff of nasty air and realized the air quality wasn’t the best.  We took the metro which was fun.  It traveled fast, and I liked that.  There was a random man who waved at me and I thought it was pretty funny and nice of him, too.  He might have perceived that I was older than I actually am.  When we got to the hotel, the lobby was really nice with a chandelier and a black baby grand piano.  We all got checked in and headed for our rooms.  A lot of people noticed that the hallway of the sixth floor had a very particular smell. We figured out our sleeping situations and went to sleep.

Day two was the “official” start of the convention.  I was nervous to go to the sessions myself so I tagged along with a couple of people at first but then I realized it was going to be okay and I started to go by myself.  I appreciated the freedom we had at the convention. I thought it was fun to be able to choose which sessions we got to go to and being able to leave whenever we wanted to.  I also thought that it was kind of cool how we could also explore the convention center as well and just walk around if we wanted to. What I noticed was that when everyone was in a session it was a good time to regain your social battery if you were feeling overwhelmed.

Instead of being in the convention all the time, I wished we could have been outside of the convention and explore St. Louis— it was kind of like Times Square but 100 times less, almost like a ghost town.  One day we went an Asian restaurant where I had soup – I really liked the broth, pork and egg that was in it, but I didn’t eat much of the ramen. I stuck to the broth and rice which was absolutely delicious. I could eat that soup for the rest of my life!

We went inside the Arch which was really fun and very unique.  When we were walking to the Arch we heard a loud bang and it turned out that it was a hit-and-run.  We only got 10 minutes inside of the Arch which I thought was unfortunate because of how cool it was.  I wished I had more time to take pictures.  I FaceTimed my mom to show her the inside of the Arch and showed her Illinois and Missouri.

Toward the end of the trip, some of us were getting cranky and I’m assuming homesick too.  It was definitely time to head home. We had an early morning the last day which was annoying because we got up at 3 AM.  I had been determined to stay up until 2 AM but obviously that failed.  I was still exhausted and when I got home, I took a six-hour nap.

Once I woke up and started talking about the trip, I realized how great it actually was and it is okay to get out of your comfort and to let your walls down.  I felt like we all got closer as friends and as a yearbook family. 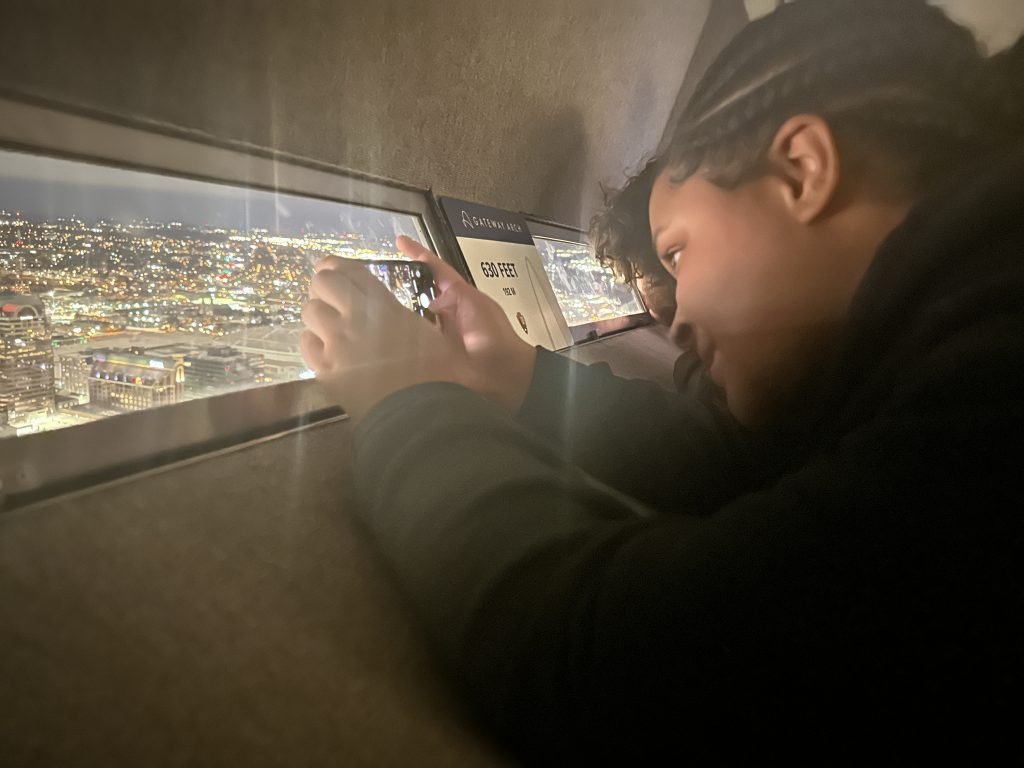 View from the top of the arch