Wow. whatever I thought I was expecting, I was surely not.

I think the best way to start would be to mention how overstimulating this trip was. Not to say it was a bad thing. Quite the opposite actually. As soon as I could, I told my dad all the details about this trip. Not for him, but for me. There was so much happening that I needed to unpack it all. I think this blog will be really helpful to reflect on as well.

During the trip, I wanted to focus as much as I could on writing. I already felt confident in my photography (which I’ll touch back on later), so I felt I’d get more out of the writing workshops.

Boy, I was right.

I started my Friday with my morning filled with sports writing workshops. Every room was jam-packed with other eager students wanting to improve sports coverage. I spent a lot of time with my co-sports editor, Bailey, which seemed perfect.

One of the biggest takeaways that I had was that you need to cover the story. I think that’s buried in the deep of my mind sometimes, but these workshops resurface that idea and now I feel like it is a bigger priority. Yeah, the sports section is about sports, but it’s about the story behind sports. What keeps players going to play the game, or why someone plays the game. Not just the football team being Central League champions, but how they felt when they became Central League champions.

It’s also really important to note that athletes are people too. That was also a huge takeaway that I had because it’s small but it’s meaningful. Everyone has a story, it’s just up to you whether you go and retrieve it People have struggles, and that does include student-athletes. The star quarterback of the football team may be going through a lot, but no one is going to know that unless you find the story.

This kind of leads to the “improve my interview game” workshop, which was also super helpful. I think knowing that the interviewee is more nervous than I am is really hard to believe. It does make sense I suppose. The interview workshop was very helpful because I know I can feel really uncomfortable and awkward when talking, but I learned that the goal is to make them feel comfortable, and let yourself be comfortable too. Treat it like improv, would be my way to put it. You have the scenario and all you have to do is use it as a base, then go off on your own. Letting the other person go on and talk can go a long way. 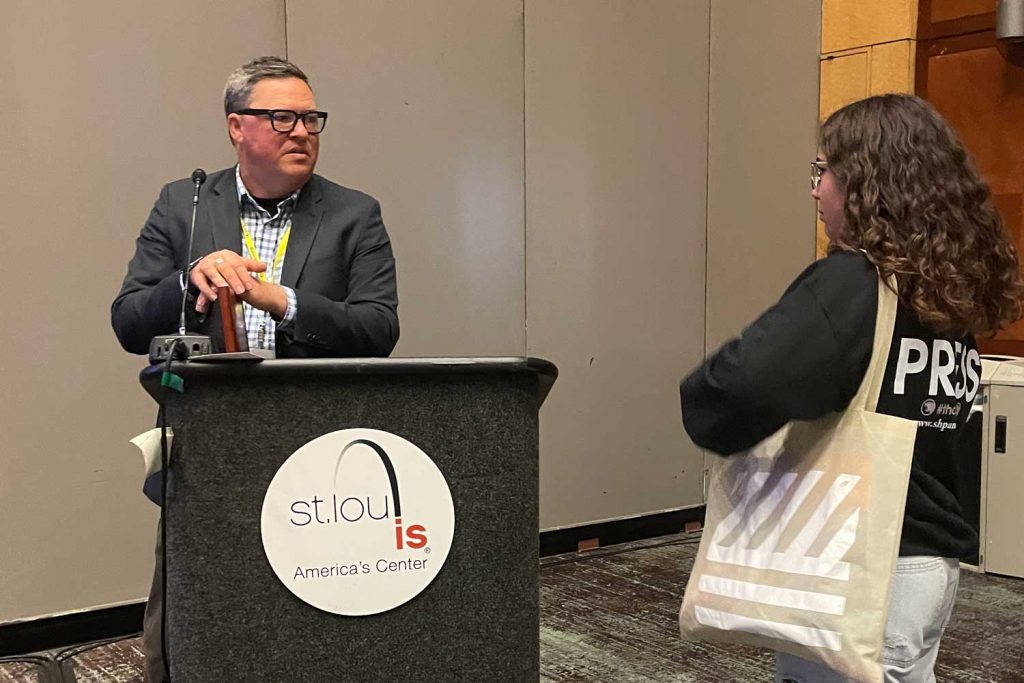 Taking the opportunity to interview a conference presenter after a session