The purpose of the lesson was to teach how to produce good photography on a reliable basis using photography knowledge and skill instead of dumb luck. To do so, we essentially must keep in mind three main goals/techniques to consistently achieve decent photography: stop action, isolate the subject, and shoot in low light. Learning the four main definitions in basic camera work — ISO, Shutter Speed, Aperture, and White Balance — are key to understanding how to begin. Additionally, understanding of focal length and field of view are also helpful.

ISO, one of the three main pillars of photography along with Shutter Speed and Aperture, refers to the camera’s sensitivity to light and can brighten or darken an image, but doesn’t necessarily act as a part of exposure. ISO is able to brighten the image but does not affect how much light is let in or for how long, only how the camera interprets the amount of light there is. Higher ISO is able to capture brighter photos in lower lighting conditions, but increasing this value will also make pictures noisier or grainier, reducing its sharpness.

Shutter speed is defined as how long the light is let into the camera for. Physically, it determines for how long the shutter of the camera is open for, and a lower number means a slower speed of the shutter opening and closing, allowing more light to enter the camera. Usually this also results in more motion blur, which is why athletes should usually be shot at 1/500. Along with aperture, it is one of the two controllers of exposure. A higher shutter speed captures quick motions more sharply, but also exposes the camera to less light, making photos appear darker.

Aperture is the third and last main pillar of photography, and is defined as the size of the opening in the camera lens to allow light to enter. It is comparable to pupil dilation in its ability to expand and contract to let in more or less light.  In order to pinpoint focus, more light is necessary, making aperture and shutter speed intrinsically linked.

White balance, although important, plays a more minor role for beginning photographers. The concept can be simplified to rendering colors in an image to how the eye perceives them, or ensuring that white parts of a subject/scene appear as white on the photo. This ensures that a scene/subject’s true colors are preserved in the photo.

Field of view is defined as how much of the scene can be seen by the lens at a given moment. This is controlled by focal length, or the camera sensor’s distance from the “center” of the lens, which is determined by the lens itself rather than the camera. A shorter focal length provides a wider field of vision while a longer focal length provides a narrower field of view. In other words, when thinking of a scene or photo as a three dimensional object such as a rectangular prism, the aperture controls for the length of the object while the field of view controls for the width and height. 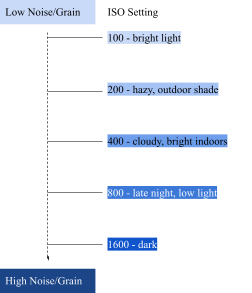 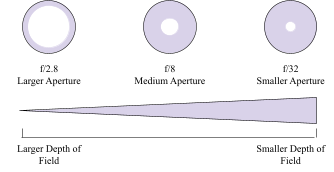