On Wednesday, November 9, 12 of my friends and I went to the airport to get on a plane to St. Louis Missouri. We left almost immediately after school, and if I’m being quite honest, it was really stressful. I’m terrified of going on planes, but having my friends there was so comforting.

We took off at 6:55 in Philadelphia and landed at 8:30 (9:30 in Philadelphia) in St. Louis. Getting to the hotel was a long trip, and we were already tired after having a long day at school and a 2 ½ hour flight.

On day one, I took two classes, a Photoshop Workflow class, and a social media boot camp.

The first class gave me a refresher on basic photoshop skills and a basic workflow to implement in the photo-taking to editing process. During this class, the teacher introduced a new way to color-correct photos and said we wouldn’t need to use correcting tools such as brightness and contrast.

After we got out of our second class, some of my friends and I went exploring around the convention center. The views of the city were gorgeous, and every part of the city looked different looking out from the building. We were told there were booths we could visit to experience new things and look at what some colleges had to offer, so we went in head first. We had no clue what we were going into and had zero expectations.

The room the booths were in would have looked like a warehouse storage area were it not for the many amounts of booths pushed inside the room. Many of them had free things to give away, such as pins, cups, socks, and even fanny packs. 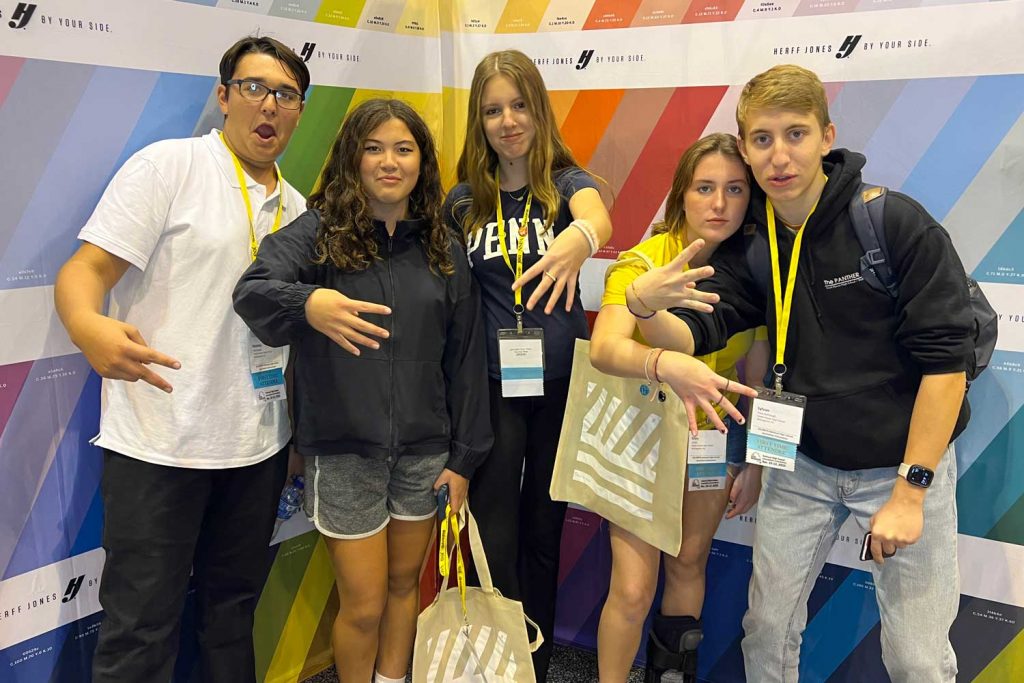 Day two was a little bit different, as classes would happen for only about an hour, rather than 3-4 hours. We got to wake up a little bit later than on day one, which was lovely because the majority of us were already tired from a lack of sleep.

My first class was at 9 and it was “The Power of a Moment.” We learned about what can make a photograph great, and how to apply basic photography skills to our own work.

Later, I took a class on Social Media Event Coverage, to learn how to improve our social media presence. I mostly run the Panther Press Instagram account (@shpantherpress) with help from Ms. Plows, Julia Gray (EIC), and Matthew Chen (EIC). In this class, we learned how to report live events, without a bias or negative connotation toward a team.

My next class was the “Up Your Interview Game,” and this taught me a lot about choosing the correct sources, and knowing my rights within reporting and interviewing. The class also taught me to prepare for interviews in advance, and helped me realize as a reporter, it is my job to give people a chance to tell their side of the story.

The food at the convention on day two consisted of a Dr. Pepper, way too much candy, one of the worst coffees I’ve ever had, and a granola bar. In St. Louis, they really only have two kinds of soda (or ‘sodies’ as they like to call it)—Dr. Pepper, and a mystery drink called RnB. We assumed it was root beer, but after tasting it, if they consider that root beer, I wonder what they think bad soda is. The drink tasted like a mixture of Fanta, Sprite, and Dr. Pepper all in one. The rest of the food was okay at the convention, mostly because it was pre-packaged by a manufacturer.

This was my first trip to a convention like this, and it was genuinely one of the best experiences of my life. I´ve learned so much from this convention, and I´m so excited to share my experiences with others. There was so much time I dedicated on this trip to learning, but I met so many nice people through the classes I took. I’m so grateful for all of the people who helped me on this trip, and who helped me come on this trip.