After lunch on day two (Friday), I went to a class entitled ¨Sports 365: A Year of Coverage,” which was very informative on how to capture a story of a team at any point in the year. The teacher taught us to capture the small intimate moments in a team, rather than just the games. Along with that, he also taught us to use our available resources to find information on what the team is doing. Whether it be going to coaches, players, or an athletic director, using your available contacts to find out more is important.

After this class, my friends and I decided to take a break to walk around the convention center. This time around, I got a lot more free stuff, including a Jostens cup and pair of socks which both I and my friends thought were hilarious. We walked around a bit more to find a booth that was giving out ring lights as a prize for spinning a wheel, and a bunch of us got different prizes. We realized the ring light could be attached to a phone, and used for recording videos and taking selfies. Enthusiastically, we used the multiple ring lights later to shoot some of our vlogs, documenting our experience live at the convention center. We went around for a little while longer and came across a table with so many yearbooks and newspaper pins. They were so cute, and I swear we took at least 30 of them. We kept looking until we found this amazing group who was doing a wordle game. If you were the first person to solve their wordle, they gave you a free sweatshirt, and I won!

Day three came faster than most of us were prepared for, and I was so tired. My first class of the day was ¨The Power of Light¨ and it was absolutely amazing. The speaker seemed to know so much about what he was talking about, and I learned a lot about how lighting can change the effect of a photograph. The speaker taught us there are three different kinds of light in a photograph. There is harsh light which is directional light that gives the photo a lot of contrast, soft light which gives diffused lighting and low contrast, and lastly directional-diffused light which is a combination of the other two types of light. Directional diffused light is light that comes from one direction but is considered ¨soft¨ or ¨diffused.”

At 10:30, we went to our yearbook critique to get advice on what we can do better with our yearbook, and it was a very informative meeting. We learned what can be improved for this year, and we got complimented on our efforts in last year´s yearbook.

Following our yearbook critique, a large amount of our group when to a class called ¨Personality Check¨ where we played a bunch of games and had to work together to solve situations. It was a great class filled with team bonding and the games and challenges were a lot of fun.

For lunch, we went to a cafe in the convention center and got mini pizzas, which was probably the best food I had all trip. We ate and watched the football game between Strath Haven and Springfield, and despite not being there, it was a lot of fun.

Our next class was “Bold Journalism” which gave all of us a lot of support in what we wanted to write. The class talked about censorship, and how any journalist, including student journalists, should be allowed to write about any public issue as long as they are writing not representing one side over another.

At around 3:30, we all went back to the hotel to bundle up because we were headed to the arch. It was a gorgeous sight, and many of us took pictures. We got to go to the top of the arch and it was so incredibly beautiful. At the top, these great workers were so sweet. One of them was singing while the other was recording her and we all danced along. I don’t think any of us experienced something like that before, and it was awesome. They even got in one of our selfies.

All in all, this trip was so much fun and brought me so much joy. I am so glad all of us got to travel together, and I am so grateful to have been included in this trip. The convention was so educational, and I got to meet so many great people along the way. 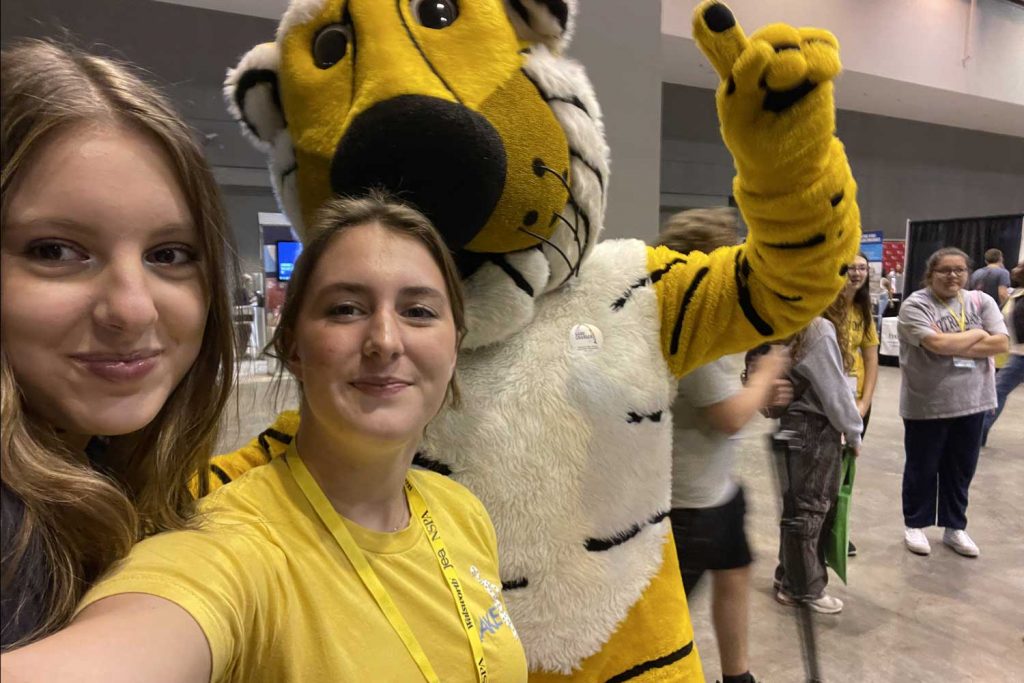 We even got to network with some college mascots.