Reflecting on the convention this weekend made me realize how helpful to my development as a journalist and photographer the experience was. I wish I could condense all the information I learned into a USB stick and upload it into the minds of the entire yearbook staff, but seeing as that isn’t possible, I’m going to opt for the next best thing and try to go back through the notes I took from each session of each day. I’ll write down the most important phrases, sentences, and aphorisms I learned from the variety of professionals I talked to, and elaborate on their meanings a little, so the highlights and most helpful pieces of advice can reach as many people as I can manage. 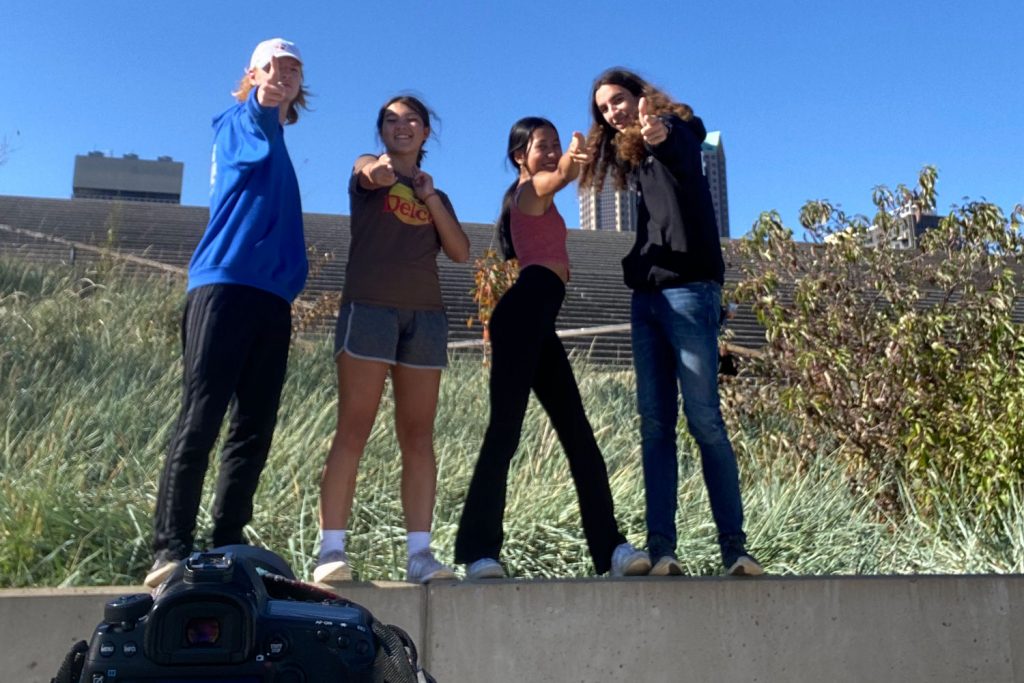 Some photography practice during our Thursday workshop

Everyone should be a photographer

Everyone should know how to take good photos so that anyone can take pictures of any event. Any coverage of an event is good, even if someone is new, it’s better for an inexperienced photographer to be there than nobody. If someone doesn’t know something you think is rudimentary, it’s the job of a more experienced photographer to teach newer members. Being snooty about someone’s skill or experience doesn’t get anyone anywhere; if you want to create a good program that will continue to make good quality publications, invest in less experienced members so they can reach your level.

Familiarizing yourself with the settings of the camera, knowing what all of the settings are, how to change them, and how changing the settings changes your photo are all crucial to reliably taking good photos rather than stumbling across a good shot. If someone asks how you took an impressive shot, your answer shouldn’t be “I don’t know,” because if it is, you can’t replicate that level of quality in the future. While you don’t need a master’s thesis on the composition guidelines you thought of in your shot, you should be keeping things like lighting, ISO, aperture, and shutter speed in mind when taking your shot, so you can keep doing what works in the future.

Getting a clear shot is important, and keeping your ISO high makes your camera work harder to take a picture. If you have a meeting with 200 people who all need a cup of lemonade, and you ask your assistant to pour all of the glasses with an even amount in each cup, you need to give them enough time to do that. If you give the assistant 2 hours, the lemonade will be even for everyone at the meeting, however, if you only give them 10 minutes, they can probably fill all of the glasses, but they can’t make it even with such a short amount of time. The same principle applies to ISO: the more light your camera takes in, the more time it needs to process that into a picture, and if it doesn’t have that time, the picture comes out grainier the higher you set your ISO to. This isn’t to say if you’re in a poorly lit area that you need a high ISO for you shouldn’t crank it up, because if you need a 6400 ISO to be able to get anything brighter than a shadow, still use it, but give your camera less work and keep the ISO as low as possible.

This isn’t so much something I learned as much as it is a really good analogy for how aperture changes a photo. Aperture determines how much depth of the photo is in focus, with a higher aperture value putting more space in focus. An analogy I learned at this workshop was to imagine yourself standing next to a fence with fenceposts running parallel to the direction you’re looking. If you set the aperture to 22, your shot will have 22 fenceposts in focus, and if you set your aperture to 2.8, you will have 2.8 fenceposts in focus.

If you’re shooting somewhere with variable or inconsistent lighting conditions, you should let your camera automatically adjust some settings for you. There’s a certain level of prestige (or often arrogance) associated with being able to shoot in Manual, a setting that disables all camera automation settings, which is still impressive to know how to do and can get you a very specific and fine-tuned shot you want, but there’s never a need to shoot in Manual. The reason cameras are so big and expensive is because they’re computers just as much as they are cameras, and computers can calculate and adjust settings to get a good picture a whole lot faster than you can. If you know how to shoot in Manual, that’s great, but depending on the shoot you’re doing, some jobs are better left up to the camera.

Refs Should be in Your Way!

A common frustration among sports photographers is lining up a perfect shot where you have just the right vantage point to get some dramatic action on a play, and then as soon as you hit the button to take the shot, one of the referees stands right in front of you. While certainly frustrating, this is actually a sign you’re doing something right! Referees need to stand where they can get a clear view of the action too, so if they’re blocking you, that means you have the right angle.

Make Their Practice Your Practice

A good strategy to get more practice in before a big game where you want a good shot is to go to a team’s practices and shoot pictures of them there. While you may never edit, caption, or publish them (which you still are more than welcome to do, don’t get me wrong), shooting practices is a great way to get behind the scenes on plays a team will run ahead of time, test new or unique angles you want to try, or just generally get a better feel for the flow of a game so you can anticipate and prepare for certain events when game day comes.

Your job as a journalistic photographer (yes, the yearbook is real journalism, and don’t let people tell you it isn’t) is to capture the whole story, not just the “main event.” Sometimes the most interesting story is in the locker room before the game, in the audience, or after the lights are out and the crowd is gone and everything is being taken down, so make yourself available to document as much as you can by being there as long as you can.

It’s easy to get caught up with pictures of the quarterback of the football team, the lead actor in the play, the student who gets a prestigious award, but every story is more than the people you see. The quarterback still needs a coach, the football team still needs to make money from ticket and snack bar sales; those are all a part of the Friday night game. The lead actor needs the stage crew to hold a spotlight on them and make sure their microphone is on, the whole cast needs people to do their makeup and costumes; those are all part of the play and musical. The student needed a teacher who taught them, and probably has family who are just as excited about the award as they are, those are all part of the story of the award. While people will always want to see pictures of quarterbacks, lead actors, and award-winning scholars, think about and document the people who got them into the limelight, because you’re telling their stories just as much as the people they support.

Your Camera is an All-Access Pass, use it

If you have a camera from the media lab and you’re taking pictures for the yearbook or newspaper, congratulations, you’re a member of the press! This isn’t just an opportunity for you to be nosy, it’s now your job to be nosy, so take full advantage of it. Go backstage at the musical, go into the locker room at halftime, go into press boxes and behind DJ tables and on catwalks, stand on things you shouldn’t, go everywhere you need to be to take a picture of what you want, and don’t let people stop you. Stay safe, stay within reason, and don’t intrude on people’s privacy, but if you can use the abilities you have as a journalist to your advantage.

Sharp shots clearly displaying strong emotions are good pictures. Period. For instance, the photographer giving the workshop recounted how one year a picture of a big football player sitting down after losing the state championship and crying won a photography competition, and then the next year, another picture of a different football player crying after losing the state championship the next year won the next photography competition. At this point, he told one of his students to get a picture of one of their football players crying, and lo and behold, that student won the next year’s photography competition. All to say, emotion is what makes a good picture and a good story, and while there’s something intrinsically fascinating about seeing what’s generally regarded as the epitome of masculinity at the school, a varsity football player, reduced to tears, emotions that strong are found in a variety of places, and in a variety of emotions, and it’s your job to find and capture those moments.

Photos Should Do What They Do ONCE

Make sure you capture a variety of actions in your shots. No matter how good your shots are, if they’re all shots of tackles or if they’re all shots of passes, the spread will be boring. If you want your photos to have the impact they deserve, they need to be the only picture that does what it does. On a football spread, have one tackle, one touchdown, one pass, and one kick. If you have more than one, it makes them both weaker.

During the workshop, I counted the instructor saying the phrase “get close” 27 times (not counting the ones I missed). Close shots are important to get all the details of an event, and you can’t get a close shot without getting close. Try to get people’s expressions, a ticket being ripped, a snack being sold, a ball getting thrown or caught, two people hugging or dancing together, and be as close as you can to get as much detail as you can. The more distinct the details, the stronger the shot and, hopefully, the stronger the memories that will be evoked in the future.